Since the beginning of Twitter time, tweeting has been all about sharing. Whether or not some of the information at the beginning of its time was of value, I can’t answer that, but since its birthday on March 21, 2006, Twitter has transformed into an environment full of knowledge. Twitter isn’t just celebrities tweeting of their exact whereabouts or professional athletes tweeting during a big game; it’s evolved into an environment all about each person developing a network to engage with and create connections. 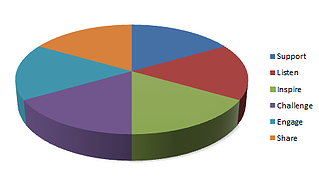 Not to our surprise, businesses soon found the value of Twitter to be much more than that of a fad, and as the increase of businesses on Twitter sky-rocketed, many ODs (because they are obviously intelligent, right?) decided to join in and take a piece of the pie. But what was the value they found in Twitter exactly if there are already online OD communities to listen and learn from experts and share individual knowledge? The value of Twitter comes from the ability to quickly and efficiently build a network in the optical industry that allows you to build relationships and learn from not only fellow ODs, but also students, patients, and the wider public, which is so powerful.

With that, we decided to create a Twitter Pie that involves 6 slices of why and how an OD should use Twitter. And just like at Thanksgiving, finishing the entire pie is a necessity; no leftovers!

Twitter is all about developing a personalized network, and for ODs the ability to connect with other researchers, educators, and practitioners gives the ability to build an educated, online support system. You can find people to reach out to that are also interested in the same topic of research you are, or even get ideas, or feedback, on something new you are trying in your practice. Before you know it, your Twitter family will become a huge support system that you can lean on at any time!

We’ve heard it since we were children, listening is probably the most important part of a conversation! Maybe I changed this up a bit, but you listen and you learn, right? One of our followers, @FirstClassKris, also pointed this out; she must be pretty social media savvy! Learning about new research or products out there has never been easier, and the information you learn could be of great value to you. Plus, a lot of your optical dispensary customers can be found on Twitter, and they will be looking for you! Listening to their feedback can never hurt!

One of our favorite things about Twitter is the ability for any individual to be an inspiration. There are a lot of wise Opticians out there, that before the boom of social media were never heard! Twitter Doctors is a directory of the most inspirational doctors on Twitter, of course including the ODs out there as well, and we'd love to see you on the list once you become a social media genius!

Expect both support and challenge from your world of followers on Twitter! Traditional learning has always been about challenge - I'm sure you remember all of those difficult lectures in college! Follow and reach out to people who may have a different point of view than you do. Maybe you won't change your outlook on the issue, but new optical industry information, whether of support or challenge, is always insightful!

Just signing up for Twitter and posting every now and then isn't fully taking advantage of the optical industry social network you've created! Join in on conversation, and when 140 characters isn't enough, link to a blog you've wrote. Twitter allows you to reflect with real people and engage with those you don't usually hear - students, patients, and the rest of the world. Let your entire audience get to know you!

Last but not least, social media is for sharing, and we all know that! Share your thought on anything you believe to be appropriate! Hashtag (#) to reach a wider audience on the topic. Share by collaboration and participation. Twitter is a give and take relationship, especially in the business and education atmosphere!

If you aren't already using Twitter, we hope you see how valuable it can be to you and your eyecare practice! And when you sign up don't forget to review our Twitter Pie! But if you already happen to be a Twitter prodigy, we want to know the value you see in creating an online, optical industry network; talk to us on Twitter!

Tags: Marketing and Social Media, Resources
Back to Blog

Is Your Optometric Practice In A One-door Or Two-door State?

Practicing optometry in a corporate setting can be beneficial for new optometry graduates and...
Read More

The Difference of Working in a One-door vs. Two-door State

We were talking to Dr. Maria Sampalis from Corporate Optometry Careers about one-door and two-door...
Read More

The closer we get to October 1st, the more it seems ICD-10 is the hot-topic of conversations....
Read More