Avoid these 3 Problem Employee Types at all Costs

What are your "non-negotiables" when it comes to the people who work for you? Does everyone working for you know your hard lines so that they can ensure that they never cross them? For many businesses, these lines are going to be things like theft, dishonesty, sexual harassment, and violence. But what about bad behaviors that aren't as blatant?

It's often the subtle things that creep in and interfere with the way people work. This is why my number one hard line is this: we work as a team and you don't get to tear down the team.

Everyone who has ever worked for me knows this because they've either seen me draw this hard line in order to create a positive work environment for them, or they've found themselves on the other side of this line, and they no longer work here. Harsh? Maybe, but I'm okay with that. Because the people on my team work hard and they deserve to know that I have their back. And, the same should go for the staff in your eyecare practice.

What I've found to be the biggest threat to a team dynamic is having someone in the mix tearing down the team, which isn't a trait that is always easy to spot during the hiring process..

People who are hell-bent on tearing down the team come in a variety of packages, but the three that I'm focusing on here are: 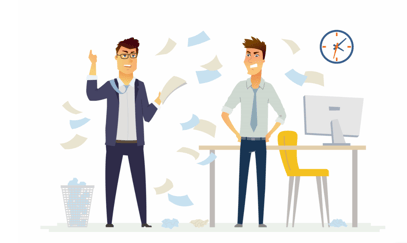 We know you want a high-performing team, so we're going to help you identify these problem makers and give you some tips on dealing with them before deciding if you have to kick them to the curb.

This person comes to your meetings and pretends to agree with the things you say, or sits in the meeting quietly not offering any input, then quickly goes to work pushing their own agenda after the meeting is over.

This person is motivated by building their own little tribe of naysayers. They thrive on gossiping and swaying everyone to be negative about projects or efforts or processes. Even if it's something that is meant to be good for the whole team. Which is why this is one of the most frustrating people, and most damaging, types we encounter.

Put them on the spot. If you're in a meeting and this person isn't making contributions and you are certain that they will start working on a side agenda after, call on them specifically and ask what they think. This either pushes them to be public with their true opinions so that you can address them with the group, or they will just agree with you and reveal to the rest of the team that they are just being two-faced.

It makes it clear that they are afraid to say what they really think and takes some of their power away. Then you can follow up afterward and tell them that you appreciate their support and are counting on them to follow through. If they don't get on board, get them off of your team.

The "My Time is More Important than Yours"

This person has a knack for running late or barely being on time. They are always trying to offload certain functions of their work on someone else, while simultaneously trying to own more projects. They will make everyone in sight their personal assistant if they can.

They manage to frustrate everyone who works with them, either by being inconsiderate of their time or by acting like the rules don't apply to them. When not handled you end up with a team who feels like you allow this person to get away with whatever they want.

Stop them in their tracks. Let them know that being on time and respectful of everyone else's time is expected, and write them up if you have to. Let everyone on the team know what is expected of them and what isn't. If they are picking particular team members to offload work to, let those team members know that they aren't allowed to take on projects from that person without your approval.

Then, give them a chance to correct the behavior. If they can prove to you that they got the message and are going to work as a team, great. If not, you will likely have to say goodbye to this team member.

Also known as a bully, this person is just difficult to work with. Maybe they have been with your office for a long time and feel like they get to initiate new employees for some reason. Or perhaps they are new and feel they have a background that is superior to everyone else. The bottom line is that the rest of the team walks on eggshells when they have to interact with this person.

The intimidator makes snide comments, is dismissive, and berates people for the slightest mistake. They derive power by making it difficult to work with them.

Sometimes it's hard to pinpoint but people just walk away from interaction with this person feeling defeated. Even if this person is great at their job, they make your team inefficient because everyone else has to put in extra effort just to work with them for fear of being treated badly.

This one is tough because the bad behavior is usually so ingrained that it's hard to change. Often, the best thing you can do is help the rest of your team learn to not be intimidated by this personality.

Encourage them to work with this person the same way they work with everyone else. Show the intimidator that you are going to support the rest of the team. Reprimand them when they lash out or act difficult. If the behavior doesn't improve, say goodbye. Your team will be better for it.

The way your employees feel when they come to work trickles out into the way your patients feel about your practice. If you've got someone in the mix who is tearing the team down, you've got a problem on your hands that needs to be dealt with.

What other types of problem employees have you encountered and how have you handled them? Do you think they can be trained to stop their bad behaviors, or is it better to cut your losses?

There's no need to suffer in silence. Read more staff management tips by downloading our guide.

Tags: Staff Management
Back to Blog

How to Keep Your Most Valuable Eyecare Practice Employees

When you land a valuable and loyal employee in your eyecare practice it's important to be able to...
Read More

5 Steps to Train Your Staff with No Eyecare Experience

There might be a time in your eyecare practice when you fall in love with a job candidate that...
Read More

Do You Have a Problem Employee Lingering in Your Optical Practice?

Almost all of us have been in a situation where we have had to work with someone who is toxic to...
Read More