Tips for ECPs: Who Was Pierre Marly?

We always look forward to a fun post from the Optical Vision Site, and this month, they delivered as usual with more tips for ECPs! Before this post, I wasn’t even aware of who Pierre Marly was, much less his contribution to bringing fashion into the eyewear industry. It’s an interesting read for those looking to take a quick break from work. Enjoy!

With much thanks to be given to social media, we find that today’s climate is saturated with self-proclaimed Fashionistas. But before stars were made with duds from ForeverXXI and H&M via selfies posted to Instagram and Tumblr accounts, the real stars were made on the silver screen and it was the most privileged and acclaimed fashion designers who dressed them. So, who are your style icons? Two starlets that come to my mind, and I think baby boomers and millennials alike would agree, are Sophia Loren and Audrey Hepburn. These exceptional beauties are perfect fashion plates that caught the eye of optician and eyewear designer Pierre Marly. In 1952 the Frenchman designed each actress her own frame, and the world took notice!

Pierre Marly is certainly the Homme to Know in eyewear both then and now. It is important to remember that in the 1950s there weren’t many options in eyewear fashion. In the mid-twentieth century glasses were worn out of necessity rather than thrill, but visionary Pierre Marly broke all the rules of design with the implementation of new materials beyond the regular acetate. Marly’s archival holds wood, horn of buffalo, leather, introduction of color, and pioneerism in shape and dimension. This is the man who paved the way for society to view Elton John’s or Lady Gaga’s eyewear choices as more than just an article to occupy space on your face…they make a statement!

Much of Pierre Marly’s collection is on display at Musée Pierre Marly – Lunettes et Lorgnettes located in Paris, France. As if I needed another compelling reason to jet set to the City of Lights! If there was one word to describe these Marly styles below it would have to be Dramedy! The musical notes style has all the makings of great of a show! They are a playfully cute way of showing your love for music without walking around playing the fiddle, and so much less bulky than hanging an accordion about the neck. Perhaps the flirtiest style of frames is the exaggerated eyelash pair. Don’t you wish you could get that plush and perfectly curled falsies look without the mess or time expense of eyelash application? As to the pair with the human form spread across the face, I wonder if Marly was making a notion of the advent of surrealism in society and its relationship to sexuality, or was he simply having fun with his perspective? 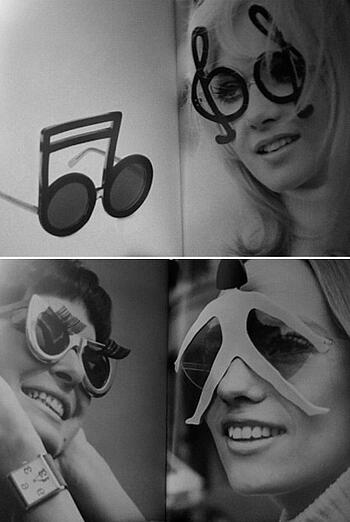 Pierre Marly made major contributions to the popularity of the Cat-Eye frame in the 1950′s.  This style was further enhanced by his muse Audrey Hepburn in her 1961 movie Breakfast at Tiffany’s (…and as I recall we both kind of liked it). Though the Cat-Eye experienced a dip in popularity in the 1970′s it is still a style we can find readily available today. Marly creatively mixed an extreme Cat-Eye frame with a round shaded lens you might have seen on the likes of John Lennon in the 1960′s. This juxtaposition of positive and negative space and glasses within glasses was so futuristic for the times. Really livens up that ponytail and turtleneck ensemble?! Mais Oui! 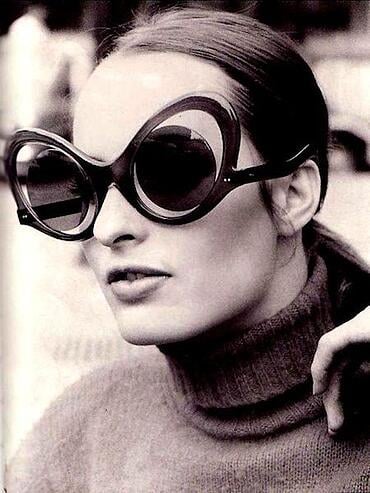 I am the first to admit, I like to laugh at my own jokes. I wonder if Pierre Marly and his daring eyewear models did too. You have to have a jovial sense humor paired with a wicked sense of style to sport these Bike Glasses by Pierre Marly. Whilst wearing these I would never tire of begging the question, “Excusez-moi, have you seen my bicycle?” Cue the laugh track!! 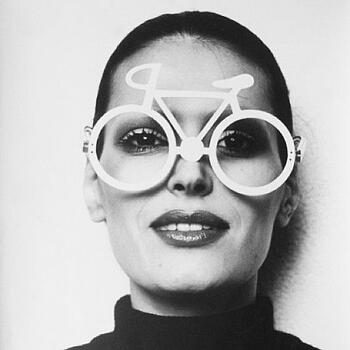 Assessing these next sunglasses by Pierre Marly is like taking The Rorschach inkblot test in psychology. What do you see? Is it a play on overly exaggerated eyelashes? Are these wings spanning across the visage? Or is it deeper than that, like hands gripping the temples further enslaving the wearer to fashion for eternity?? Ok, Marly probably did not intend these frames to evoke an assessment of personality or emotional functioning, but their inspiration is truly in the eye of the beholder. 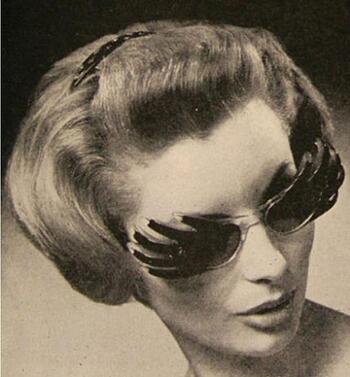 This rare vintage Cocktail Style pair of shades features a tortoise print frame which at the time was a symbol of luxury. Today every major eyewear designer implements the tortoise look in their collections as it is classic, and these Cocktail frames are served up as a classic with a TWIST! The bug eyed frames are asymmetrical and feature a lighter gradient on the lens, curtailing the rules of symmetry in that era but making for some Good Libations! Cocktail anyone? 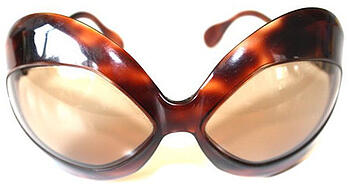 Pierre Marly certainly had no reservations about experimenting with different shapes in his designs, and these sunglasses featured below are no exception. What further sets them apart is the use wood in these frames. It goes without saying that wood has many uses, even the earliest humans reaped the benefits of woodworking in tool creation. Working wood into Eyewear Fashion is another story… obviously these frames weren’t used to hunt but they still managed to put food on the table for Pierre Marley while propelling the survival of eclectic designer eyewear. 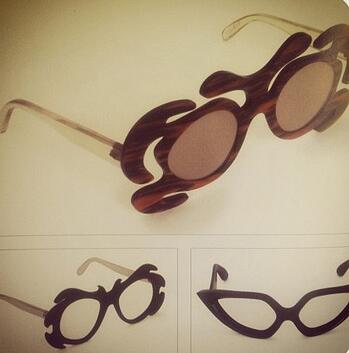 Tennis is one of the most beloved sports played throughout the world, and Pierre Marly pays homage to sport in these radical tennis racket frames. Although they may not be suitable for  day-to-day wear this statement piece will always serve to be a conversation piece. Love tennis, but suffer from tennis elbow? Here is a pain free way to enjoy tennis while protecting those eyes. I can picture the most prestigious fashionista wearing these while sitting front row at Wimbledon, all eyes on her! 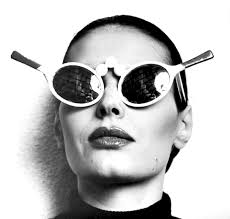 The world should be every grateful for Pierre Marly’s implementation in color in his designs.  Today we can walk by a kiosk in the mall and see frames in every color of the rainbow, but in the 1950's that was not the case. These babies feature a dark cornflower blue plastic frame with a lens that isn’t too dark which is great for low-light visibility. Perhaps Pierre Marly knew that these eye-catching frames might want to be worn indoors?! Bien sûr! 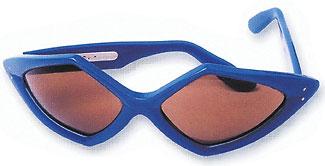