With the strong prevalence of social media, more and more businesses in the optical industry have started their own campaigns. Successful implementation of an optical social media campaign can be a challenge, but if done right, can be very beneficial to your business. Not only does a social campaign blast information to a large amount of people, but it also adds brand personality and value to your company name.

There’s a lot of popular advice out there about social media, but much of it should not be followed if you want to be effective in the eyecare industry specifically. So, we have come up with 7 pieces of advice that you should ignore when implementing your optical social media campaign. 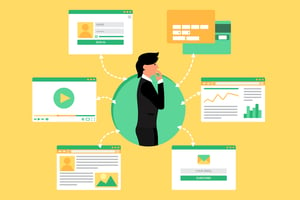 Keeping your social media accounts updated is extremely important. If you aren’t actively posting content, people will be likely to un-follow you altogether. However, there is a fine line between updating consistently and posting too much. Some people believe that by posting more frequently, more people will be exposed and engaged with their content. In reality, posting as often as possible can be spammy and annoying.

How often you post and how engaged your followers are, doesn't always have a positive correlation. Posting too often can be overwhelming to your audience causing them to skip over your updates in the future. There is a large amount of content on the Internet, so your work must stand out from the clutter. Rather than concentrating on how often you post, you should focus on writing and releasing high quality content regularly.

2. Use Every Platform Available

Facebook, Twitter, Instagram, Pinterest, TikTok…the list goes on and on. With all the social media platforms out there today, it is a common perception that you should use every one available in order to reach more people. However, by choosing a select few, you can manage your time more effectively.

If the patients you want to connect with don’t use Instagram, it probably isn’t a wise idea to focus any attention on it. Instead, choose the platforms that your patients use the most and focus on connecting with the right people. By narrowing down the platforms you use, you can focus on creating quality content.

3. The More Followers, The Better

Yes, having followers is critical because the goal of social media is to reach and engage an audience. However, the more followers, doesn’t always mean the better. Think about it this way: would you rather have thousands of followers who had no interest in what you were saying, or a couple hundred followers who actively read and interact with your posts?

Attracting a solid base of followers who will repeatedly interact is more important than trying to rack up as many followers as possible. This smaller group will likely be more interested in your products and ultimately become loyal customers.

It is easy to automate all of your posts to go out on your social media pages at a certain time. While it is acceptable to do this with a portion of your posts, you should not automate everything. Social media gives you the ability to interact with your audience in real time. By automating all of your posts, you’re sending a message that you don’t want to listen to your followers, you just want them to read your content. So, make sure you read through comments and respond to them individually.

Also, you should not automate the same content to go out on all your social media platforms at once. People who follow all of your various platforms will catch on to this very quickly, and you can lose your credibility. Use different social media to share different types of content. For example, photos do best on Facebook, and you can post significantly more on Twitter than LinkedIn.

Many people believe that social media is free and can replace traditional media, but this is far from the truth. Even though there are no costs to sign up and post on most social media sites, it isn’t all free. You need to invest in human capital to create content and engage with your followers. Also, to make sure your social media efforts are effective, it is smart to purchase marketing analytics software.

Your posts on social media should not strictly be professional and technical. Social media gives you the opportunity to be more personal and casual than other media platforms. Posts should be conversational and avoid overly technical terms. By making your social media platforms more relatable to your followers, people will be able to engage with you. Don’t be afraid to show the human side of your practice, or to express a little humor once in a while!

It’s inevitable that someone will disagree with you and express their feelings on your social media page. How to deal with these comments is crucial to your success. Knowing which ones to respond to and which ones to leave alone is the first battle. While some people are writing just to get a rise out of you and don’t need to be answered, other comments need to be addressed. You should admit to your mistakes and address how you will handle certain issues that your followers are concerned with.

Another way people avoid negative comments is to delete them or disable the comment feature altogether. If you decide to disable comments, people will use their own social media sites to bash you. When this happens, you no longer have the ability to monitor the comments being said. Knowing how to respond to negative comments can be beneficial to you and can even change people’s minds about your practice.

We cover the ins and outs of running marketing campaigns in our ebook, OD Handbook: Small Business, Big Profits.

Tags: Marketing and Social Media
Back to Blog

You've probably noticed that almost every successful eyecare practice has a promotional video that...
Read More

The Financial Guide: The True Cost of Optical Marketing

Based on the needs of our readers, we're starting a new series here on the VisionWeb blog called ...
Read More