Eyecare Software Through the Ages

We're curious to see how far we've come in terms of the software eyecare practices use. It wasn't too long ago that every optometrist was using paper filing, faxing, and other manual data entry methods to manage their health records, orders, prescriptions, and patient communication.

As you can imagine, conducting business by hand could lead to errors and frustrations. We're going to examine how automation and digitization have transformed the everyday workflow for optometrists. Maybe you'll notice a process you could optimize with the help of new technology?

How Has Optometry Software Improved in 50 Years? 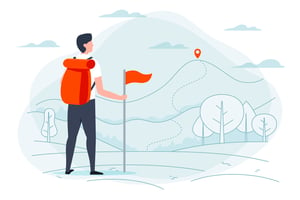 The birth of optometry, the rules of practice, and the professional degree as we know it occurred in the early 1900's to 1951. The first use of electronic health records occurred in hospitals in the 60s. Then, the first comprehensive EMRs were adopted by the government in the 1970's. These medical records were problem-oriented and allowed multiple parties to verify diagnoses across the patient's entire medical history.

With the widespread use of the internet beginning in the late 1990's, internet-based health records became the optimum method for data storage and communication across the board. However, most optometrists did not adopt EHR software until well after 2001. This is due to the fact that many medical professionals and optometrists alike were concerned with interoperability, patient data security and HIPAA compliancy, or they simply felt more comfortable with their existing processes.

However, President Obama made the first government-sanctioned move toward EHR in 2014 with the American Recovery and Reinvestment Act. Most optometrists refer to this as the "Meaningful Use" regulation that provides monetary incentives for practices that go electronic.

Many optometrists were unimpressed by generic EHR software because they didn't possess the customization and capabilities they required for eyecare specifically. That's why specialized EHRs made just for ODs have been developed in the past 10 years. Many rural and small practices may still use paper records, fax prescriptions to the pharmacy, and use traditional patient recall messages. However, you'd be hard-pressed to find a large, urban eyecare practice that doesn't rely on an EHR or PM system to serve its patients.

Optical software today helps optometrist track the quality of care, reduce errors in order entry, outsource their insurance claim management, and work from home using cloud-based systems. These tools help ODs focus on patient care instead of dealing with administrative work, errors, and finances like they had to in earlier decades. With the exponential progress software has generated in practices recently, it's hard to imagine what the eyecare industry might look like in 5 years.

Don't let your practice fall behind. Read our ebook on modernizing your methods and updating your technology.

We've been doing a series of posts to show eyecare practices how Uprise will benefit every member...
Read More

3 Time-wasting Habits to Prohibit From Your Optometric Practice

To run an optimized optometric practice, you and your staff need to have procedures and processes...
Read More

Beyond EHR Software: Keeping Customers Happy in Your Dispensary

Earlier this week we wrote a post about why your practice needs the perfect EHR software with a...
Read More